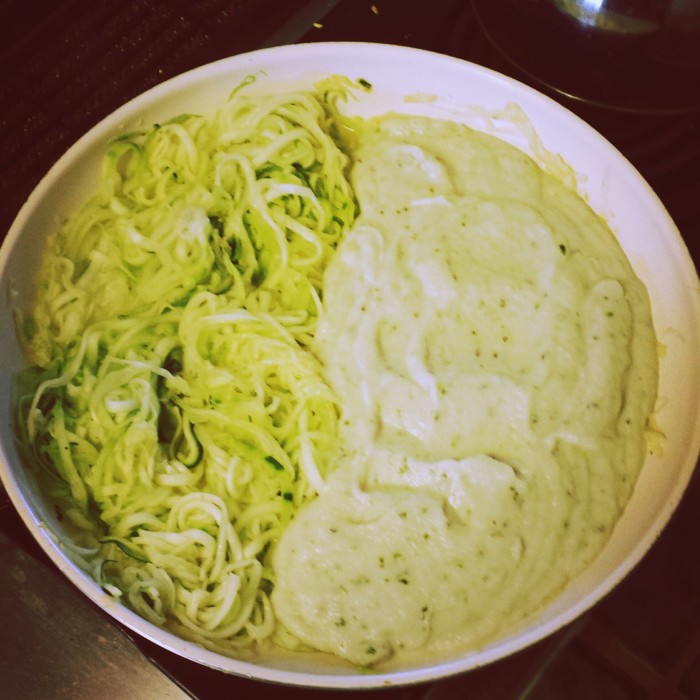 Peel them first and cut off the ends.

I have made zucchini noodles three ways and all of them are fine. My favorite slicer is this one off Amazon. Second is the Veggetti, and finally you can just use the standard kitchen tool to Julienne them and pull the noodles apart before you cook. Whichever you have is fine.

Usually where people go wrong is that they make their noodles right before they need them and cook with them right away. Zucchini has a lot of water in it and you will probably end up with soup. If you make them at least 30 minutes ahead of time, if not the whole day, you can actually salt them to remove the excess water.

Obviously use Himalayan salt and simply salt lightly, place a paper towel, layer some more, salt, new towel and so on. If you do them a day in advance, change the towels. This is going to be a huge advantage to having awesome noodles! I’m pretty ballsy and not that concerned with lighting things on fire, so I’ll even push a paper towel down on them when I’m cooking them to grab out what’s left. If you light your paper towel on fire that is your own fault and I’ll deny this post ever happened 😉

I like to also cut them in half once they are in noodle form, because they can be really long and serving them is a PIA that way. In the fridge they go for at least 30 minutes. Put the bacon in the oven and bake it. Drain the grease, I usually save it in a jar, you’ll need a little for the sauce so keep it nearby.

Now you can get started!

First cut your cauliflower into florets and bring a large pan of water to a boil. You will boil the cauliflower for about 10 minutes, you want it soft, and retaining some moisture, but not squishy. I recommend using a slotted spoon to remove the florets or straining them but having the water go into another pan. You are going to need some of that boiling water in a minute so don’t toss it down the drain!

Grab your food processor and start breaking down the cauliflower. Once it’s is pretty fine, add in the COOKED bacon and garlic. It will still be very choppy.

Now add in 1/4 of the can of coconut milk at a time, you may use just the 1/4 or up to 1/2. Add in one Tablespoon of the bacon grease and then add in spoonfuls of the still hot water as needed only.

If you’ve ever made a sauce in a food processor you already know it takes forever. You will be standing there letting it mix for a good full minute or two until you’ll know if you need to add water or coconut milk. If you’re going “it’s not working why is it not creamy?” you didn’t wait long enough LOL.

Right when you have it where you want it, add the basil. You still want chunks in there, not just green sauce, so don’t put it in too soon. Set it aside when it’s the consistency you want and move on to cooking your noodles!

I just saute mine in a pan with coconut oil. No big deal. When they are the right amount of soft, usually 5-7 minutes, add the sauce in too, and mix it all together. Leave on low for another 3 minutes and just let it soften into each other. That’s it, you’re done! You can add chicken or whatever you’d like to it, or just serve as is!